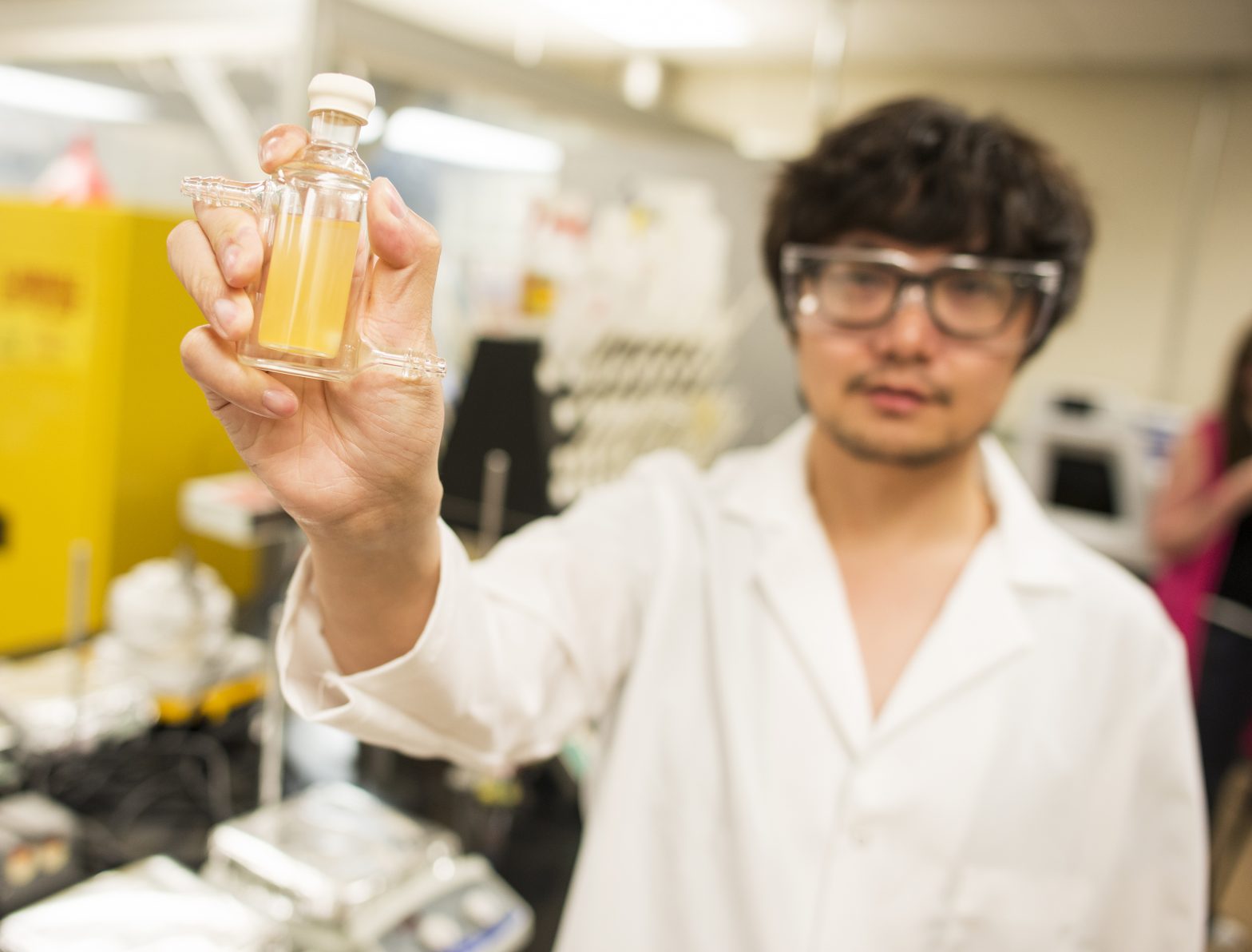 Sunlight is widely regarded as the most abundant energy source on Earth.  It is clean, free, renewable, and it depletes no fossil fuels.For these reasons, scientists have spent many years developing ways to convert sunlight into a usable form of energy.  Current methods of conversion, however, are inefficient and expensive.

Researchers at the University of South Dakota in Vermillion are working on the next generation of solar energy applications. They have developed a method to use visible light for hydrogen fuel production.

Peng and his research is supported by the South Dakota Experimental Program to Stimulate Competitive Research (SD EPSCoR) “Beyond the 2010 Initiative” Research Infrastructure Improvement award, which receives $20 million over five years from the National Science Foundation.

According to the U.S. Department of Energy, hydrogen fuel is environmentally friendly and can be produced domestically, reducing dependence on fossil fuels. Challenges hydrogen fuel faces include high production costs and limited availability.

Peng uses a process called photolysis, or the chemical decomposition induced by light, to break down water into oxygen and hydrogen.

Water splitting through photolysis is not as simple as putting it in sunlight, however.

Using visible light to split water has been a challenge because the process does not work independently.  Peng uses a catalyst developed at USD added to the water to induce photolysis.

Getting to where they are now started many years ago when scientists from Switzerland reported the use of a photo catalyst to split water into hydrogen and oxygen in the 1980’s, said USD Associate Professor Ranjit Koodali.

Koodali, who leads Peng and other students in researching photo catalysts, says the researchers demonstrated how the material titanium dioxide, a common pigment found in products such has paints and cosmetics, is capable of working as a photo catalyst.

“This material has an interesting property that allows it to capture sunlight,” said Koodali.

Despite its ability to capture sunlight, certain restrictions of the material have prevented its use in solar energy applications.

Titanium dioxide only absorbs ultraviolet light, which according to Peng makes up less than five percent of the sun’s energy that reaches earth. Visible light makes up 45 to 50 percent of the solar spectrum.

“Visible light is a more abundant energy source that we can use from solar energy,” said Peng. “That provides us more efficient energy to convert from solar to chemical, which means from solar light to hydrogen fuel cells. “

Researchers made the next step in science several decades ago, says Koodali. Scientists have been working with a nanomaterial called ‘quantum dots’ which are capable of absorbing visible light.

A group of researchers in South Dakota started working with these concepts and applied to water splitting in 2009, Koodali said.

“We merged these two ideas and developed a material that has both quantum dots and titanium dioxide material,” said Koodali. “This way we not only have an effective photocatalyst but we also have a material that can absorb visible light.”

Koodali and Peng added there is only a small group of researchers studying water splitting using photolysis.

“Our research is really unique,” said Peng. “We have our own novelties in this research because this is the first report that can use visible light for catalytic water splitting to generate both hydrogen and oxygen.”

Currently, the team at USD has a photocatalyst that is very stable in experimental conditions, says Peng.

The gas produced by the experiment is analyzed every hour, Peng added. The whole experiment is prolonged to six hours to investigate the stability of the catalyst.

Although the research at USD has produced new achievements in harnessing solar energy, there is still progress to be made.

Peng is currently focused on getting the catalyst to be as stable and efficient as possible while producing larger volumes of hydrogen and oxygen. Other students at USD are researching other applications of the photocatalysts including degrading water pollutants from household and industrial products.

“The most fabulous part of research is you never know where it will lead you,” said Peng.