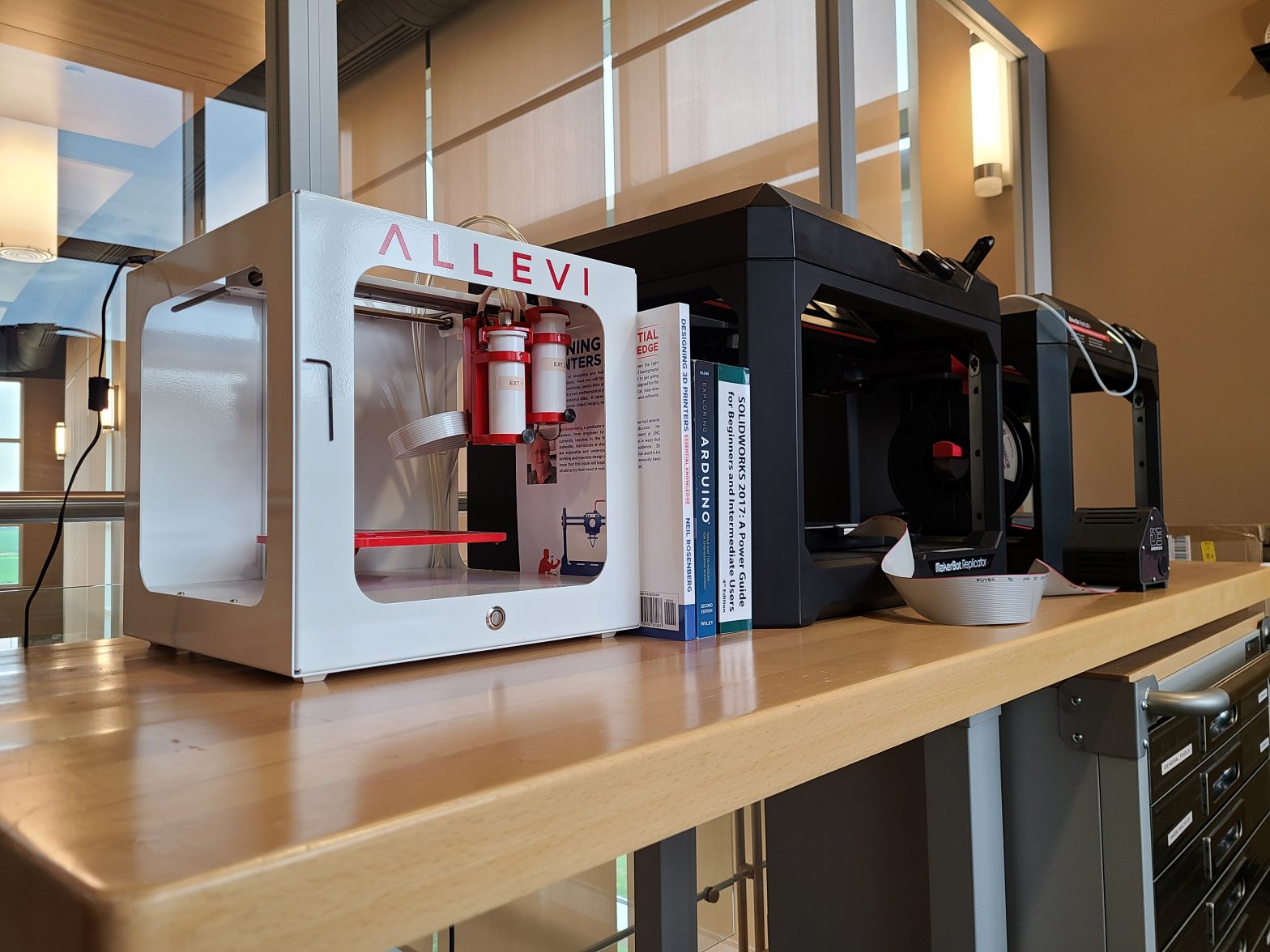 Bioinformatics and 3D bioprinting are revolutionizing the worldwide biomedical device industry. Here in South Dakota, USD researchers are engineering intuitive automation software to speed the bioprinting processes, thanks to funding by the National Science Foundation.

Tim Hartman peered at his laptop to examine 500 image pairs, sets of control and test versions. He logged data from the research from the past 20 years into his team’s image analysis software, Bioinformatics Analysis, Statistic, and Image Comparison (BASIN).

As the senior biomedical engineering undergraduate student adds new code into his program, the software learns to analyze the photos of microscopic structures. The soon-to-be-published research will be part of a larger network of data-mining software that aims to automate a portion of 3D biomedical lab work.

“I think bioprinting has a lot of potential,” Hartman said.

The research on data-driven bioprinting software, under the faculty direction of his professor, Dr. Etienne Gnimpieba, is funded by a Track-1 grant from the National Science Foundation to South Dakota EPSCoR. Hartman conducts the engineering research, titled “Data-Driven Bioprinting for Biomedical Applications,” along with his team at the GEAR Center at the USD Community College for Sioux Falls campus.

Once it’s all set, the software will speed the process of developing new biocompatible materials and devices — that have a makeup fitting with living organisms. This causes a more efficient process for experiments involving 3D bioprinting and, ultimately, the production of biomedical devices for human health.

It’s foremost an engineering project, Gnimpieba said. At the beginning, Hartman checked the feasibility and reviewed the available literature, and now, he is bridging between computation and the lab aspects of the project.

Hartman said this is his first time being the first author on a project, and his role has focused on the BASIN image analysis software and getting familiar with the 3D printer.

The images in BASIN, the tool that analyzes these images objectively, were derived from part of the Track-1 project, Biofilms Knowledge and Information Discovery System (Biofilm-KIDS).

Hartman presented this research at SD EPSCoR’s virtual Undergraduate Research Symposium in July. He said poster sessions are important because they allow him to share his research with those outside his field to get an “external, unbiased take” on his work.

Hartman also presented this research in the Capitol Rotunda alongside 15 other students from various universities at the annual spring Student Research Poster Session, organized by South Dakota EPSCoR and the South Dakota Board of Regents, at the state capitol in Pierre.

“Getting to present some of his work to this conference helps him to have a different perspective on how he analyzes the problem and develop a new solution,” Gnimpieba said. “It’s always very helpful, especially for a young researcher.” Hartman said he enjoyed connecting others with his research at the event by making it relatable on a personal level and simplifying the jargon.

His research, however, is anything but simple.

The compound software will use the thousands of articles and up to 100 structural designs available for 3D bioprinters. It will save significant time for scientists by not only finding relevant articles but also optimizing them, which creates a protocol of the best structure and materials for the experiment. The users will simply review the findings and connect the digital blueprint with their 3D bioprinter.

“You’d just put your chemical into the printer, upload the 3D structure file, and then ‘go.’ And you could make a hundred of them, a thousand of them at one time if you wanted to. It’s automation; it’s just a different type of automation.”

The data-driven research breaks down into an image analysis tool, an article conversion tool, a storage system for high-quality original images and a biovisualizer. Their idea is cyclical: As other scientists use the system to do their research, they’ll add the new research back into the system for it to become more up-to-date and dynamic.

Hartman’s focus right now is creating software, but he said he hopes to work more with hardware, like the 3D printers, in his future career. “As long as [it’s] a tangible product that moves science forward, as long as I help make that, then I’m okay doing software development,” Hartman said.

Hartman spent last summer familiarizing himself with the versatile 3D bioprinter in the GEAR Center. He practiced carefully squeezing the syringe to draw in the printing liquid, loading it smoothly into the extruder, and uploading and connecting the digital files. The machine does the rest as air pressure pushes the stopper to release the ink-substance onto the build-plate following the design to create the final product.

Originally from Sioux Falls, Hartman graduates in 2022 and, then, plans to pursue a doctorate in biomedical engineering. Before beginning school for his STEM degree, he worked with submarine nuclear propulsion in the Navy and then with cabinetry hardware. Studying bioinformatics has been one step along the way to his goal of working with biomedical devices. “This has helped me continue on my career path of hardware development with a flavor of software development,” Hartman said.

His current project is focused on a specific subsection of medical research called bioprinting. Most people are familiar with 3D printing, which funnels plastic into a 3D form based on a digital blueprint. Bioprinting, similarly, takes the computer’s instructions and creates a form — that could fit compatibly inside a human body. Hartman said the new and rapidly emerging area of scientific study supposes that because the body is 3D, so should be the medical devices that help heal it.

“That’s the goal — to get to the point where you can just insert a scaffold, and your body’s cells will grow on the scaffold and, then eventually, dissolve the scaffold. And now you’ve got as good as new,” Hartman said.

Follow, friend, or connect with SD EPSCoR through our social media accounts.

Back to top of text.