Interning a Mile Beneath the Surface, 2022 Summer Interns Share Their Experiences 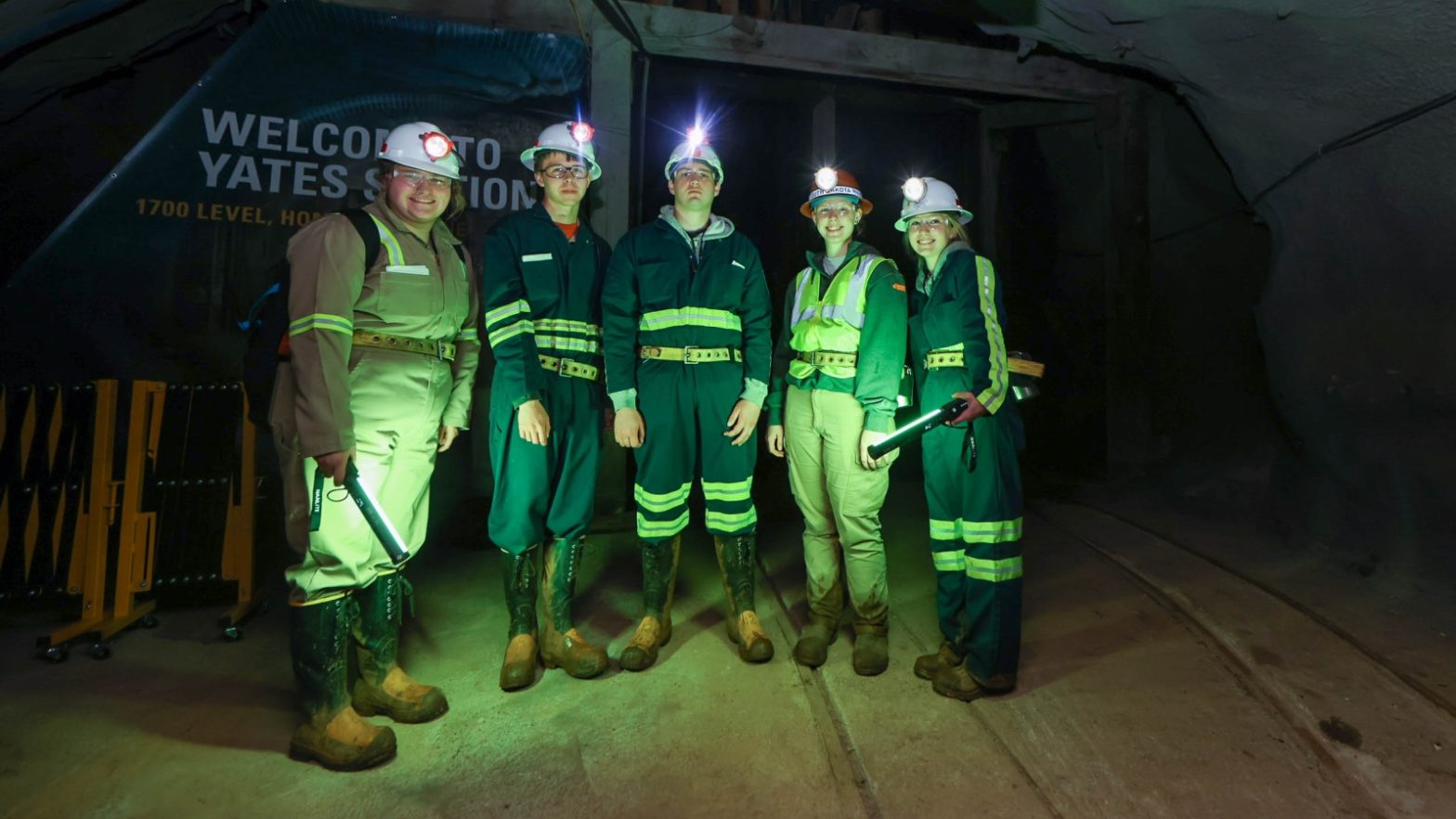 This piece by Sanford Underground Research Facility was published August 1.

This summer, Sanford Underground Research Facility (SURF) welcomed seven summer interns, inviting them to explore a career in their chosen field during the ten-week program.

“This year’s group made a cohesive group of STEM-curious interns,” said Nicol Reiner, director of Education Outreach (E&O) at SURF. “Throughout the entire summer, the group has been super committed — not just to their work and their area of interest — but to supporting each other’s research projects and building great experiences.”

The structure of the program gives interns both an overview of the facility and in-depth exploration of their field of interest. For the first two weeks, interns toured the surface and underground, meeting with experts from each department.

“From education to science to engineering to safety — every intern got to see what other departments did,” Chad Ronish, SURF science education specialist who coordinates the internship program. “The tours and conversations showed our interns the scientific and historical significance of the facility, so by the time they were done with the orientation, they could see how their work fit into the bigger picture.”

Next, interns spent eight weeks with a specific department, diving into their field of interest. “They had a chance to really experience their potential career fields, to see if that’s truly what they are looking for,” Ronish said.

Dave Bozied internships, which are funded by the South Dakota Science and Technology Authority (SDSTA) and named for the former SDSTA board member Dave Bozied, provide internships in physics, chemistry, geology, engineering, science education and communications.

Weeldreyer reflected on several transformational experiences during her internship. While working with the LUX-ZEPLIN (LZ) dark matter experiment, Weeldreyer got hands-on experience, learning how to check connection cables and adjust photomultiplier tubes to their operating voltage. Several weeks into her internship, the LZ collaboration reached a milestone, announcing its first results to the scientific community.

“That was really exciting because they got to announce that they are the most sensitive dark matter detector in the world,” Weeldreyer said. “It was cool to have actually done work that contributed to the experiment.”

Weeldreyer also conducted an experiment of her own. Using a portable muon detector, she measured the flux of muons at locations throughout the facility, monitoring the decrease in noise as she traveled deeper underground.

After her internship, Weeldreyer came to a conclusion: “I’ve always been fascinated by physics research, especially high energy and particle physics. Now, after getting my hands on an actual experiment, I would like to become an experimental physicist — which makes me excited beyond words. I couldn’t have asked for a better experience.”

In honor of the late SURF electrical engineer, Chris Bauer, the Bauer family has supported engineering internships at SURF since 2014. This year, Joseph Egan, Montana Tech, and Halle Fjelland, a senior at Spearfish High School, worked with the Engineering Department.

Shadowing SURF engineers, Egan learned about the engineering challenges that are overcome to host science a mile underground. One experience, touring the Ross and the Yates hoistrooms, specifically stood out.

“It was a very cool experience, learning about the hoists from the operators,” Egan said. The hoists power travel throughout the underground. While both hoists were originally built in the 1930s, the Ross Hoistroom underwent major renovations in 2020. “It was really impressive to see the differences between the Ross and the Yates, comparing the original 1930s hoists to the upgraded engineering.”

Two education interns spent their summer with the E&O team at SURF. These internships are supported by South Dakota Established Program to Stimulate Competitive Research (EPSCoR).

Curtis Petersen and Jacquelynn McKnight, both pursuing degrees in education at BHSU, worked with the E&O team to create professional development programming for South Dakota educators and prepare curriculum units for the upcoming school year.

A member of the Cheyenne River Sioux Tribe, Petersen hopes to return to his hometown of Eagle Butte, South Dakota, to teach and become a principal. During his internship, Petersen developed a sample lesson plan that incorporated Indigenous pedagogy best practices.

“Indigenous pedagogy is a method of teaching that centers on Native Americans,” Petersen said, explaining that he’s learned the importance of going beyond verbal instruction and using observation, imitation, field activities, imagery and humor to connect with students.

For McKnight, her internship experience had a profound impact on the trajectory of her career.

“In the beginning, I wasn’t completely sure that I wanted to be a classroom teacher,” McKnight said. “I wondered what classroom teaching was really like. Was it really worth it? Am I going to gain from this as much as I’m giving?”

As McKnight helped the E&O team facilitate a summer professional development program, she interacted with dozens of teachers from across the state.

“The teachers had a very influential impact on me,” McKnight said. “They were raw. They expressed their struggles in the classroom, struggles that were happening still to this day. But they were so excited to continue, even though it was hard. I learned that teaching isn’t something with an initial reward, but that we are able to give students something that is more than just an object, it’s something they’re going to take throughout the rest of their lives.”

About Internships at SURF

Through SURF’s competitive internship program, students gain real-world experience that propels them toward a career in their chosen field. Internships help students figure out what they want to do and give them the opportunity to work with people from around the world in a unique environment.

Applications are typically due in January of the year of the internship. For more information, visit the SURF internship information webpage.