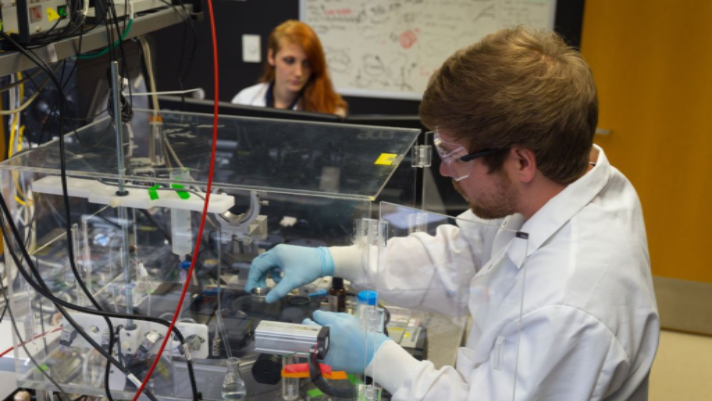 Scientists have a better understanding of a mechanism that allows cells to internalize beneficial nutrients and not-so-beneficial viruses, thanks to collaboration among researchers from two South Dakota universities and the National Institutes of Health.

South Dakota State University associate professor Adam Hoppe, South Dakota School of Mines & Technology professor Steve Smith and NIH scientists Justin Taraska and Kem Sochacki combined three unique types of microscopy to track how a protein called clathrin triggers cell membrane bending. They found that clathrin, which creates a honeycomb shaped scaffold on the cell membrane, has an unexpected amount of plasticity when pinching off small portions of the cell membrane. Their work was published in the Jan. 29, 2018, issue of Nature Communications.

The contributions of NIH scientists Justin Taraska and Kem Sochacki in Bethesda, Maryland, were made possible through a federally funded intramural research program.

“It was an awesome team science effort and an important model for success,” said Hoppe, a cell biologist and BioSNTR director. His research focuses on developing antiviral and anticancer therapeutics.

“This is a fundamental ‘how does the cell work’ kind of question that has radiating impacts on a multitude of disease processes and important physiological functions in plants, animals and humans,” Hoppe explained. “The process, known as endocytosis, is one of the main mechanisms by which cells internalize material from the environment and remodel their surfaces.”

Hoppe and his team essentially filmed live cells internalizing their own membrane using fluorescence on a nanoscale. Then they used a laser beam to differentiate horizontal and vertical orientations and chemically froze the cells at various stages to capture high-resolution images of membrane bending.

“Endocytosis in human cells is primarily driven by clathrin, which forms a honeycomb lattice that grabs a piece of membrane and pulls it inside the cell. Viruses hijack this process to get into cells; it’s also how many drugs are delivered into a cell,” explained Taraska, a senior investigator in the Laboratory of Molecular and Cellular Imaging at the National Heart, Lung and Blood Institute (NHLBI), part of the NIH. He and his team scanned the cells using super resolution light imaging with fluorescence and electron microscopy, correlating the two by laying one image on top of the other.

Smith, a physicist and director of the SD Mines nanoscience and nanoengineering program, said, “This a big technical accomplishment. Three teams separated by thousands of miles examined the same cell, down to the nanometer level— that’s an incredible accomplishment!”

He and his team used atomic force microscopy to precisely measure the clathrin structure and resulting vesicles, including their height and diameter. Each cell had 50 to 100 vesicles.

The three-pronged approach gave the researchers confidence in their findings—and their collaboration is continuing.

“This collaboration was unique, combining three advanced techniques and taking advantage of everyone’s unique expertise,” Taraska said. “It worked because everyone was sharing and coming together to tackle a single important problem.”

Smith agreed, “BioSNTR brings people together with different kinds of tools and expertise to shed light on processes that we don’t understand. It’s about forming a team and giving them a mission.”