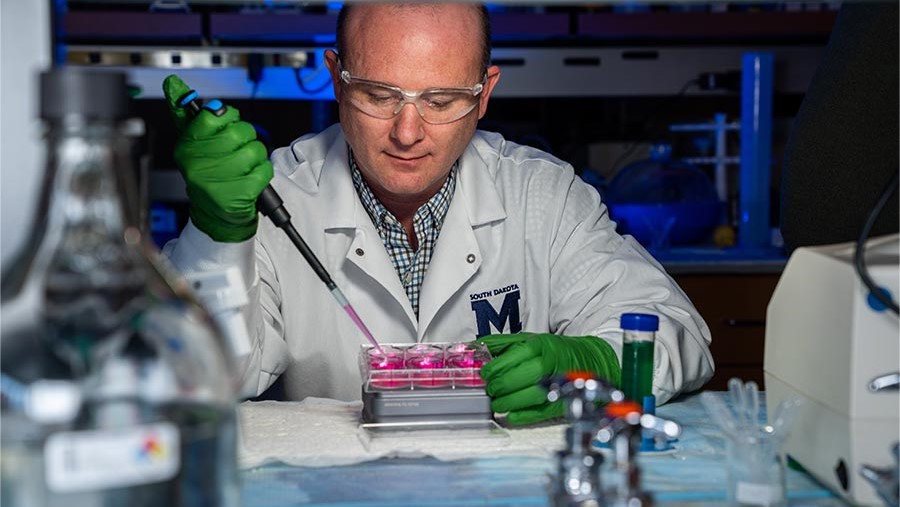 This piece by South Dakota Mines was published April 7.

Scott Wood, Ph.D., assistant professor of nanoscience and nanoengineering at South Dakota Mines, has won a highly prestigious National Science Foundation (NSF) CAREER Award for his work to study the causes of osteoarthritis and to build foundational knowledge needed to someday reverse the progression of the disease.

Osteoarthritis most often occurs in the hands, hips, and knees and can affect senior citizens and those who engage in repeated tasks or manual labor. Osteoarthritis develops when the cartilage inside a joint begins to break down, causing pain, stiffness, and swelling. “Professional athletes, soldiers, law enforcement personnel, even mail carriers are all at much greater risk because of the excessive loading they put on their joints,” says Wood. Millions of adults in the United States suffer from osteoarthritis, and current treatments offer little more than temporary pain control.

Wood and members of his research team pioneered and patented breakthrough technology, called CellWell, which enables the study of cartilage cells in a way that partially mimics their natural state. When combined with powerful scientific instruments including a lattice light-sheet microscope and an atomic force microscope, the CellWell technology allows researchers to observe and test cartage cells in new ways. This unique combination of tools offers insights into the causes of osteoarthritis that were impossible before.

This project is jointly funded by NSF’s Biomechanics and Mechanobiology Program and the Established Program to Stimulate Competitive Research (EPSCoR). The preliminary research that led to this patented technology and NSF CAREER Award was funded by the South Dakota Governor’s office and Board of Regents.

“The research funding from the state was absolutely essential in getting our work to this point. Without this initial funding, we would not be seeing this level of success today,” says Wood.

The NSF website states, “This project will advance the knowledge base in cellular vibrational analysis, molecular tensegrity, and cellular mechanobiology and establish [Dr. Wood’s] long-term career at the intersection of nanoscience, nanoengineering, and biomedical engineering.”

“Congratulations to Dr. Wood for this monumental achievement. His world-class research and his effort to inspire the next generation of STEM professionals deserves the highest praise. He is one of many researchers we are proud to have at Mines who are advancing the frontier of innovation,” says Mines President Jim Rankin, Ph.D.

The NSF describes the CAREER award as the “most prestigious award in support of early-career faculty who have the potential to serve as academic role models in research and education and to lead advances in the mission of their department or organization.”

Wood is one of four faculty at Mines to win an NSF Career Award since 2015 and the second to win in the university’s Department of Nanoscience and Nanoengineering this year.

“Winning two CAREER awards in the same year in nanoscience and nanoengineering is exceptional and shows the outstanding work of every individual in the department,” says Rankin.

Cartilage is part of the shock absorbing system of the body. It protects joints and allows some cushion when doing activities like walking or running. Past research has shown that cartilage likes exercise in the right amounts; cartilage tissue responds favorably to rhythmic motion within a Goldilocks Zone. “Too little force is bad for these cells and too much force is bad for these cells; they like it just right in the middle,” says Wood.

Wood is trying to understand any links between the motion and the health of the cell. Part of his research looks at molecules called “integrins” that he describes as the “hands of the cell” which act as physical connectors that extend from the outside of the cell and connect to moving structures on the inside. “If you pull or push on the outside of one of these molecules, it gets sent down the chain to the inside of the cell and vice versa. In some cases, we believe that this motion can change the cell’s behavior,” says Wood. “We tend to think of cells as static things you might look at in a book, but in reality, they move quite a lot.”

Using powerful microscopes in new ways, Wood and his team found that the internal skeleton of cartilage cells “dance” and the dance of the cells changes when they are treated with drugs that mimic osteoarthritis. Previous work in the field has established that cartilage cells respond in ways that improve cartilage health when the tissue is stimulated with moderate levels of cyclically applied (i.e., dynamic) force, whereas they respond by breaking the tissue down when the same level of force is applied and held constant (i.e., static). The reason for that different response to static and dynamic force is not understood, and the frequencies tested previously have always been chosen arbitrarily rather than based on anything the cells themselves are doing.

Wood’s ongoing work aims to determine how much static force cartilage cells can sustain before the cells show signs of stress. He will also work to build an apparatus that can apply rhythmic forces to the cells in frequencies that mimic the “dance” of healthy cells to determine whether the motion from that dance is responsible for the preference of the cells for forces that are applied dynamically. This will be done using electromagnets targeting the outer surface of the cells. Finally, Wood will also study the “hands of the cell” and their relationship to other structures on the cellular surface to determine the impact that pre-stretching those molecules may have on the ability of the cells to respond to motion.

“Osteoarthritis is a really complicated disease – there are several different pathways that can lead to its development. We know that cartilage cells are mechanically sensitive, but we really don’t understand the ins and outs of that sensitivity at the molecular level, and we aren’t likely to find a cure or even an effective treatment for this disease until we first understand more about these relationships,” says Wood.

The Drumbeat of Dancing Cells: Inspiring the Next Generation

Inspiring and educating students and future STEM professionals is an important part of any NSF CAREER Award. Wood’s educational outreach will target college students by creating research opportunities for both undergraduates and graduate students, joined with outreach specific to students at local tribal colleges.

Wood is also planning hands-on summer camp activities for middle and high school students that could include education relating traditional Lakota concepts of rhythms in drumbeats and dancing being important for health to the rhythms of the “dancing” cartilage cells being tested in this project. Wood will work with tribal elders to help teach cutting-edge scientific principles that can be shared in the classroom setting by tying them into Lakota worldviews and culture alongside hands-on activities like drum making. “I want to put a few beats together to help the students hear and conceptualize the difference between the dances of healthy and arthritic cartilage cells and have them develop their own drum-based story connecting rhythms with health and disease based on what they hear from the cells in our lab,” says Wood.

On top of his work with university and older K-12 students, Wood will also reach younger K-12 Native American students by working alongside award-winning Hunkpapa Lakota children’s book author Jessie Taken Alive-Rencountre of Rapid City, from the Standing Rock Sioux Tribe, and illustrator Erin Walker-Jensen of Ft. Yates, North Dakota, who grew up on the Standing Rock Reservation. The goal is to incorporate his work into culturally and scientifically age-appropriate books for young (3rd-5th grade) and very young (K-2) Lakota students explaining what cells are and how they work within the context of teaching them about the healing power of drums and music in Native American tribal culture.

“In researching children’s books on cells, we could not find any that targeted kindergarten students,” says Wood. “We hope this effort will fill that gap and inspire future generations, especially in populations within our region that are underrepresented in STEM fields.”