NASA has set its long-term sights on sending human explorers to Mars and researchers from across the country will be engaged in developing the technologies to make this happen.

Bill Paloski, director of NASA’s Human Research Program, will discuss
what a future Mars mission might 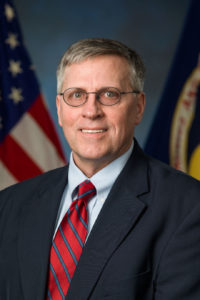 look like and some challenges that must be overcome to maintain the health and performance of crew members aboard such missions at 1:30 p.m., Sept. 27, on the South Dakota State University campus. The event at the University Student Union’s Lewis and Clark Room is free and open to the public.

“We know how to get robots to Mars, but getting people there and back safely and productively is yet another challenge, not only for engineers, but also for the people aboard those vehicles,” Paloski said. The 35-million mile trip to Mars will take about nine months—one way. A round trip journey with a three-month stay on the planet surface may take in the neighborhood of 21 months.

“We are pathfinders, figuring out what medical and psychological issues the human explorers will face and how we can resolve them,” he explained. Doing so will require the expertise of biologists, physiologists and psychologists, as well as engineers.

“My job is to put out solicitations to find the right kinds of teams to work on these challenges,” Paloski explained. “I want to spread the word to make sure South Dakota researchers, and others, are aware of the funding opportunities within our program.”

In particular, South Dakota researchers are eligible for funding through the NASA Established Program to Stimulate Competitive Research (EPSCoR) Program, which seeks to build relationships between NASA research assets, industry and EPSCoR jurisdictions’ academic institutions to develop capabilities in aerospace and aerospace-related research in participating states.

To facilitate this, Paloski will meet with researchers and students from South Dakota universities. “I want to learn more about what’s going on in South Dakota,” he said. However, he is already familiar with one SDSU faculty member.

In 2000 and 2001, Professor Sung Shin of the Department of Electrical Engineering and Computer Science spent the summer as a visiting faculty fellow in Paloski’s NASA laboratory in Houston. The two have kept in touch and Shin has been encouraging him to come to Brookings. Paloski noted, “The EPSCoR work gave me motivation and capability to do a road show and come talk to faculty researchers.”

Through Shin, Paloski has learned of SDSU researchers working on artificial intelligence, next-generation systems to integrate medical devices and smart systems that can work in remote areas. “That is a big part of what we’re trying to do,” Paloski said. “We are looking for people developing solutions for populations in remote, isolated environments.”