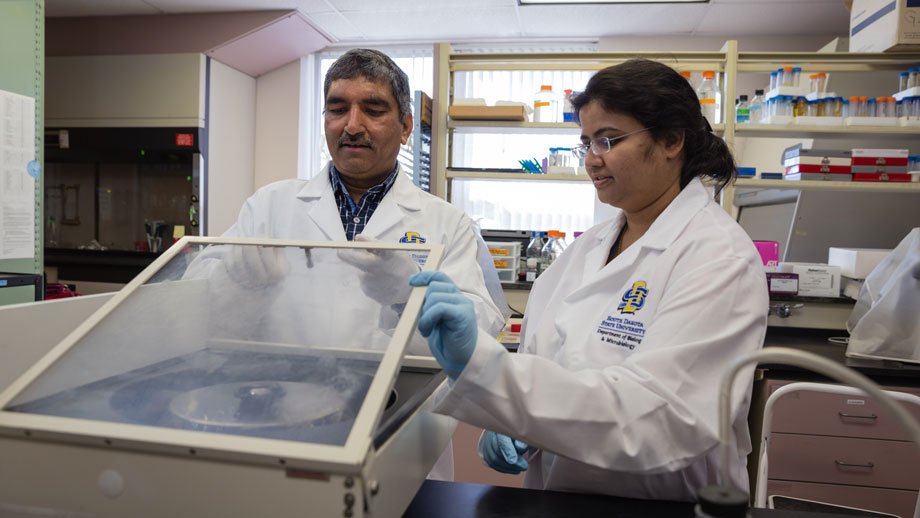 Studying how influenza viruses cause disease just got a little easier, thanks to a new tool developed at South Dakota State University.

Scientists have been using cells from chickens, dogs, monkeys and hamsters to study influenza viruses that infect pigs and humans. Now they can use cell cultures from the tissues of swine nasal passages, tracheas and lungs to study any of the four influenza viruses—A, B, C or D.

Swine influenza can also affect humans, he continued, pointing to the 2009 influenza pandemic. “Learning how influenza viruses replicate and transmit from swine to humans is critical.”

Through a National Institutes of Health grant, Li and his team are determining how influenza D, which SDSU researchers discovered in 2011, infects cells to evaluate the likelihood of the virus becoming a risk to humans.

“The outcomes of these primary cells relate closely to what’s happening inside the animal,” said postdoctoral research associate Chithra Sreenivasan, who developed the cell cultures as part of her dissertation research. The study results were published in the February 2019 Virology journal. Article images are featured on the cover.

“For a scientist to get a journal cover this early in her career is a significant milestone,” said professor Radhey Kaushik, graduate coordinator and assistant head of the Department of Biology and Microbiology. He and Li were Sreenivasan’s research advisers. In addition to Sreenivasan, one doctoral student, a master’s student and an undergraduate researcher worked on the cell culture project.

“The long-term goal is to understand the pathogenesis of influenza viruses, what receptors they use and how they manipulate the immune system. Studying the viral biology in these cells may reveal novel targets to interrupt virus replication,” Kaushik said. These primary cell cultures will help scientists develop antiviral drugs.

“These cell cultures can be also used to develop suitable adjuvants for vaccine development,” Kaushik said. This new tool can provide critical information that may lead to the development of a universal influenza vaccine.

After harvesting and culturing the cells, the researchers examined the proteins and the polarity to determine that the cells behave similarly to the epithelial tissues in the animal’s body. “The cells must express certain proteins, which keep them tight,” Kaushik said.

Furthermore, the researchers found the cell cultures express the same receptors that influenza viruses use to infect the cells. The lining of the nasal passages, trachea and lungs are where influenza viruses enter the body, he pointed out.

Based on the results of this study, Sreenivasan may develop similar primary cell lines from cattle to study influenza D. Though the influenza D virus was first isolated from a diseased pig, cattle are the primary reservoir.