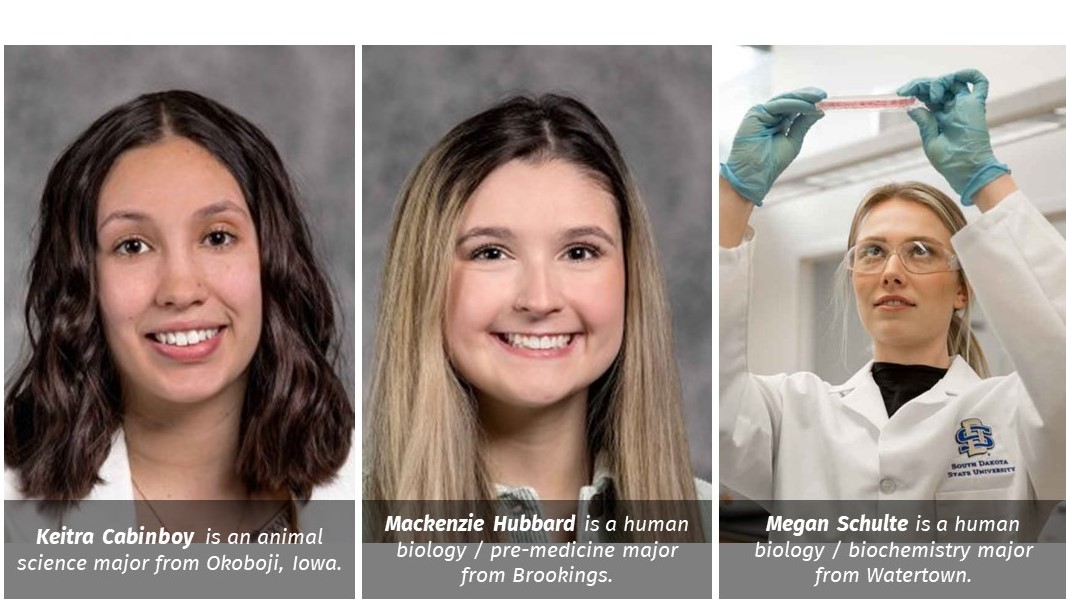 Three South Dakota State University (SDSU) juniors will tell South Dakota legislators about their research on how children develop their relationship with the natural world and how cancer cells spread to other parts of the body. They will be in Pierre on Wednesday, March 9, as part of the 2022 Student Research Poster Session in the State Capitol Rotunda. The public is invited to attend.

Keitra Cabinboy, an animal science major from Okoboji, Iowa, and Mackenzie Hubbard, a human biology and pre-medicine major from Brookings, are working on a research project that examines how family, culture and geographical location shape the way in which children form their environmental identities.

Their research adviser is associate professor Carie Green, the Profilet and DeJong Family Endowed Director of Early Childhood Education for the School of Education, Counseling and Human Development. Green came to SDSU in fall 2021 from the University of Alaska Fairbanks. Her National Science Foundation CAREER award research project is the first of its kind to explore — from the children’s point of view — how they learn to regulate their emotions when exploring nature.

Hubbard has been considering a career in medicine, but this undergraduate research project has sparked her interest in working with children. Cabinboy will apply to veterinary school, including SDSU’s Professional Program in Veterinary Medicine, this summer.

Megan Schulte, a human biology and biochemistry major from Watertown, is examining a pathway through which cancer cells evade the immune system and spread to other parts of the body. Her adviser is assistant chemistry and biochemistry professor Rachel Willand-Charnley, whose research combines expertise in organic chemistry, glycobiology and cancer immunology. Schulte will apply to medical school this summer.

The Alaska research project gives Cabinboy and Hubbard, who are Wokini Scholars, the opportunity to examine how Indigenous culture affects how children interact with their environment. Hubbard is an enrolled member of the Lower Brule Sioux tribe, while Cabinboy’s father, Keith, grew up in the Fairbanks area and is a member of the Doyon Corporation, which represents multiple interior Alaskan tribes.

Specifically, the NSF project compares the experiences of Alaska children living in Fairbanks, which has about 100,000 people, and an isolated village with around 700 inhabitants, a majority of whom are Alaskan Native, which is near the Bering Sea. During outdoor expeditions, the children take turns using a wearable camera to capture their interactions with nature.

Cabinboy and Hubbard are working with graduate student Bethany Hotchkiss to review the videos taken last fall and document what the children say and do. They meet weekly with Green to analyze and interpret the data.

The two undergraduates are also looking forward to their first trip to Fairbanks, Alaska, March 20. Their trip is made possible through funding from the American Indian Student Center, SD EPSCoR (South Dakota Established Program to Stimulate Competitive Research) and NSF.

This is also a chance for Cabinboy, who visited Alaska twice as a child, to reconnect with her family. “Coming into college, I did not know anything about being Native American,” she said. Through the American Indian Student Center, she has learned about Indigenous traditions in South Dakota but, based on a conversation with her aunt, Alaskan Native cultures are quite different.

Schulte became interested in doing cancer research while taking organic chemistry under Willand-Charnley’s tutelage. “I knew I wanted to do research to build my credentials for medical school,” said Schulte, who began working in Willand-Charnley’s lab in fall 2020. The experience has led her to consider an M.D./Ph.D. program through which she could continue doing research.

During the school year, she spends 10 to 20 hours a week in the lab. Last summer, Schulte worked full time in Willand-Charnley’s lab through the Department of Chemistry and Biochemistry’s East Family Fellowship. She is working on a paper on her research to submit for publication this spring.

“Dr. Willand-Charnley operates her lab in a fashion where undergraduates are given full responsibility of their project,” said Schulte. That level of intensity and her desire to become a doctor led Schulte, who was on the SDSU swimming and diving team, to make the difficult choice to give up swimming to do undergraduate research. “There was no way I could do both, so it came down to what would get me further in the long run,” she explained.

Schulte’s project builds on previous research in Willand-Charnley’s lab that showed how cancer cells use sugar residues, known as glycans, to disguise themselves as normal cells and thereby evade detection by the immune system. Schulte is examining the Sialic-acid-Selectin pathway through which cancer cells cloak themselves and essentially “hitch a ride” on specific Selectin receptor-containing cells, thereby traveling or migrating to other parts of the body.

“The cancer cells are determined to move themselves along through the bloodstream to get to other locations within the body. We want to keep them in one spot,” Schulte explained. Using CRISPR-Cas9 gene-edited lung cancer cells, she is evaluating how the absence of two specific genes alters Selectin-binding.

“We found one certain knockout that increases selectin-binding,” she said. Developing drug therapeutics that target the enzyme this gene produces may help mitigate this metastatic pathway.