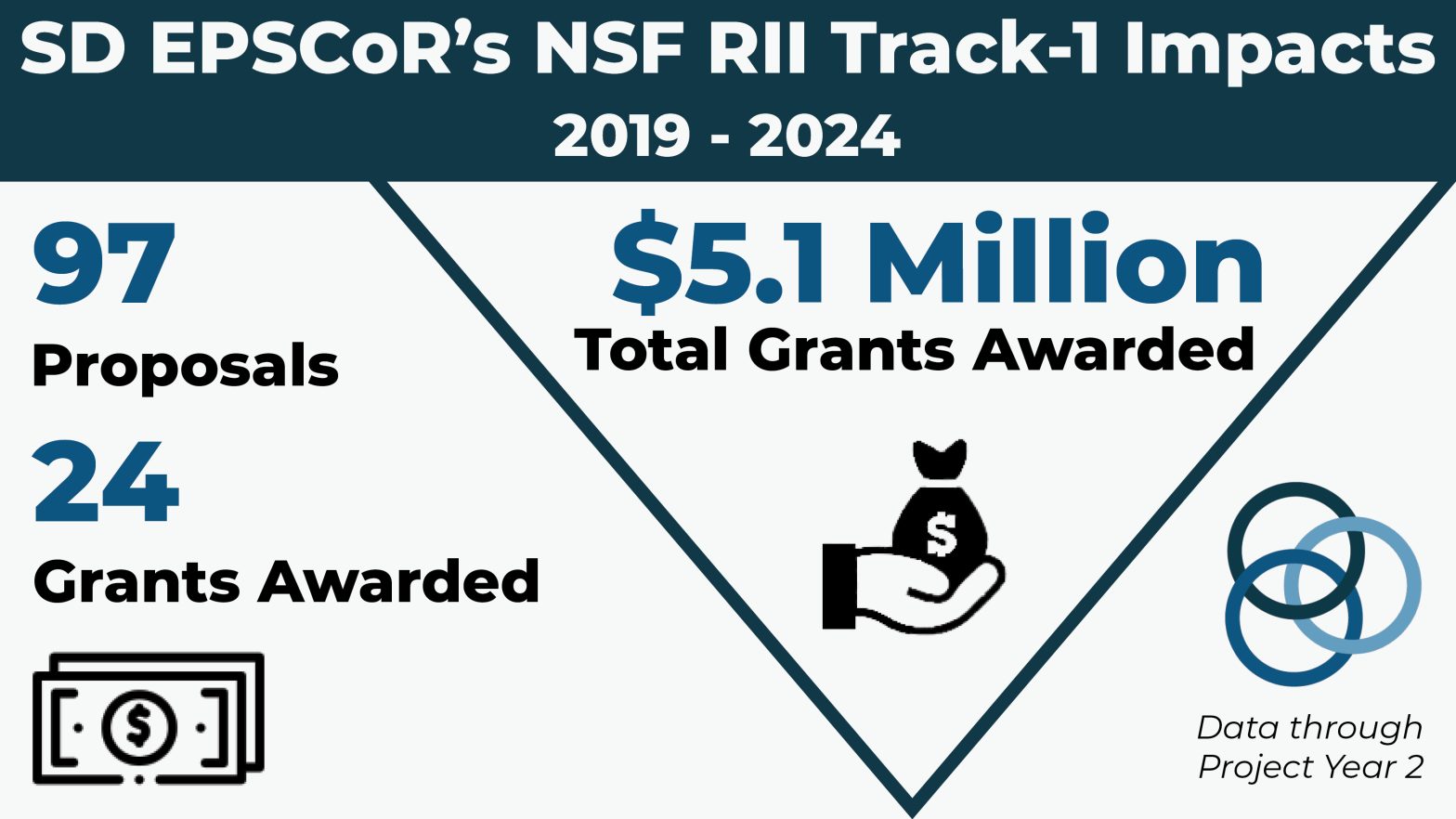 Read on to learn how NIH BRIN, NASA EPSCoR, the S.D. Space Grant Consortium and three NSF Track-2 projects have spent the past project year.

The National Institutes of Health’s Biomedical Research Infrastructure Network (NIH BRIN) in South Dakota is funded by INBRE (IDeA Networks of Biomedical Research Excellence) through the Institutional Development Award (IDeA). The latest awards were for $3.7 million through August 2021 and supplements totaling more than $700,000 — one for university collaboration between Mount Marty, the University of Nebraska and the Santee Sioux tribe — and the other for tracing COVID-19 variants. In summer 2021, 47 undergraduate students and about 45 faculty participated in research at BRIN’s partner institutions. BRIN also provides scientific library databases for science at the University of South Dakota (USD) and its partners.

The South Dakota Space Grant Consortium (SDSGC), which is part of NASA’s Office of Education, supports aerospace, earth science and STEM through education, research and public service in the state. Public, private and tribal universities along with informal science centers, industry partners and government agencies make up its 24 partners. More than $2.4 million in SDSGC funds went directly to 810 undergraduate and graduate students at 10 colleges and universities in South Dakota over the last 15 years. In that time, more than 100 students participated in internships in NASA and aerospace areas with the help of SDSGC. The program, which is a Capability Enhancement Consortium, received funding of $760,000 in the 2020 fiscal year.

NASA’s Established Program to Stimulate Competitive Research (NASA EPSCoR) in South Dakota aims to augment science and engineering research related to NASA’s mission and to promote economic development for STEM. The program is administered through SDSGC, and the current award total is $2.3 million. These funds support 32 graduate and undergraduate students in the state, and 40 faculty members participate with NASA EPSCoR’s projects. The program is based at four institutions in South Dakota. Over the past 13 years, NASA EPSCoR has given $820,000 in seed grants and $88,500 in tribal college collaboration grants and has brought in more than $9 million in competitive NASA funding.

This NSF Track-2 Award, titled “The IceCube EPSCoR Initiative (IEI) — IceCube and the Data Revolution,” holds a current $3 million to continue collaborative research between South Dakota, Alabama, Alaska, Delaware, Kansas and Nebraska on the data revolution. Together, they research IceCube, an observatory serving Multi-Messenger Astrophysics (MMA). Xinhua Bai, professor at South Dakota School of Mines and Technology (SDSMT), leads the South Dakota arm of the project. Across the six participating states, the research involves nine faculty, six institutions and 21 students at the undergraduate and graduate level. From South Dakota, two undergraduate researchers and one Ph.D. graduate researcher work on the project.

Rajesh Sani, professor at SDSMT, leads a $6 million Track-2 grant titled “Building Genome-to-Phenome Infrastructure for Regulating Methane in Deep and Extreme Environments (BuG ReMeDEE).” The BuG ReMeDEE consortium explores methane regulation in deep and extreme environments with the potential impact to develop innovative biological routes to convert methane into biofuel. Seven South Dakota faculty will continue to collaborate with Montana State University and the University of Oklahoma on the project through 2022. Across the three EPSCoR jurisdictions, 54 undergraduates, 30 graduate students and five postdocs research with the BuG ReMeDEE project.

This Track-2 program is creating Big Data Analytic Tools for collaborative study of biofilms at the Data Driven Material Discovery Center for Bioengineering Innovation to better understand the benefits and harms of the spectrum of applicable biofilms on industries like municipal those of water, marine, manufacturing, and oil and gas. The $6 million total NSF Track-2 award that continues through 2023 involves four institutions and 11 South Dakota faculty between SD Mines and USD. There are 38 total graduate and undergraduate students involved, 23 of whom are in South Dakota.