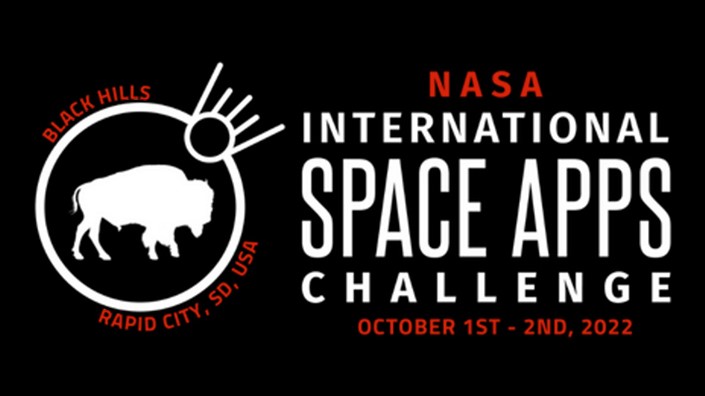 This piece by South Dakota Mines was published September 22.

Travis and Amanda Davis, who graduated from South Dakota Mines in 2012 and 2013 and then went to work for NASA, are bringing a unique NASA-sponsored event back to Rapid City on October 1 and 2.

“When NASA accepted our application to bring the Space Apps Challenge to Rapid City, Amanda and I were ecstatic,” says Travis. “We are so excited to host the world’s largest space & science hackathon in the Black Hills,” Amanda adds. “After co-hosting the NASA Space Apps International Challenge in Dublin, Ireland, we knew this was something we wanted to bring back to the Hills. It offers an opportunity to bring the community together but also to help foster ideas, growth, and potentially new business opportunities in the area,” says Amanda.

The NASA International Space Apps Challenge is touted as an “international hackathon for coders, scientists, designers, storytellers, makers, builders, technologists and others in cities around the world, where teams engage NASA’s free and open data to address real-world problems on Earth and in space.” The event is free and open to the public and includes a series of challenges that teams can choose from.

“Most people don’t know that a large portion of NASA data is available to use for free” says Amanda. “Very few people or organizations utilize this treasure trove of information and intellectual property simply because they do not know where to find it and/or how to utilize it,” Travis adds. “The NASA space apps challenge shines a bright light on the utilization of the data available through ideation of ‘apps,’ but we like to concurrently make people aware of the vast intellectual property available to all through technology transfer offices at NASA,” says Travis.

“The NASA International Space Apps Challenge is an excellent way for people to learn about and use this data to solve Earth and space problems,” says Amanda. “This year, there are 22 challenges for your team of one-to-six participants to choose from, and the ideas and opportunities are endless.”

This is the first time Rapid City has hosted the NASA International Space Apps Challenge. The global event, which began in 2012, is held each October over the course of two days. “I’m very excited to see what ideas our community comes up with,” says Amanda.

Amanda says while the event is all about using NASA data to solve problems or challenges, those who come do not need to be experienced computer coders. She says teams that include a wide range of expertise from many different backgrounds and identities most often do best at finding solutions and opportunities within the challenges posed by NASA.

Prizes will be awarded to the top three local teams, and one team will go on to compete in the next round of the international competition. The grand prize will be awarded to 10 teams from around the world who will be invited to watch a live rocket launch from a NASA facility.

The event begins at 9 a.m. Saturday, Oct. 1, at the David Lust Accelerator Building (at 18 E. Main Street in Rapid City). Participants must register before the event start that morning. Participants are encouraged to build a team and pre-register so they can check out the resources available ahead of time. Those who enter do not need to have a team at the time of registration; there will be a team-building activity at the start of the event for those who are not already a part of a team. Each participant will receive a t-shirt, prizes and food at the free event. There will also be door prizes from NASA and others awarded throughout the event.

About the Space Apps Challenge

The NASA International Space Apps Challenge is touted as an “international hackathon for coders, scientists, designers, storytellers, makers, builders, technologists and others in cities around the world, where teams engage NASA’s free and open data to address real-world problems on Earth and in space.” The 2022 NASA International Space Apps Challenge theme is “Make Space!” At Space Apps, they strive to eliminate barriers of access to space and science opportunities. Space Apps is for anyone and everyone! Participants from around the world are welcomed regardless of background and experience to create, explore, learn, and build together. Through each year’s Space Apps Challenge, they continue to support and empower ideas through innovation and inclusion.