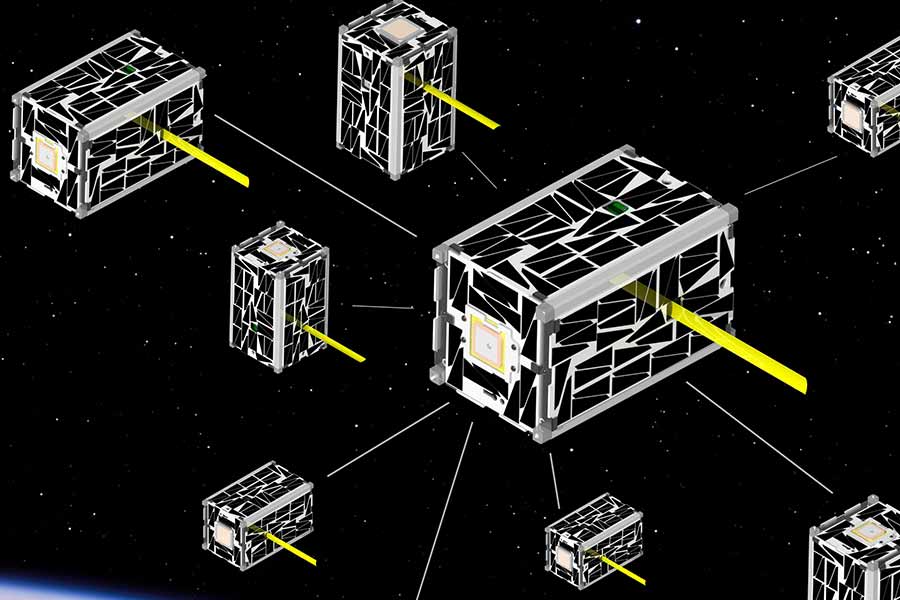 Satellites are often thought of as huge complicated devices that are deployed on the tops of rockets or in space shuttle payloads. They hold massive telescopes, sophisticated weather monitoring devices or global positioning system components.  The price tag for large satellites is often measured in billions, not millions.

CubeSats are different. They’re smaller – think volleyball not Volkswagen, and they’re cheaper. NASA describes a CubeSat as a “low-cost pathway to conduct scientific investigations and technology demonstrations in space, thus enabling students, teachers, and faculty to obtain hands-on flight hardware development experience.”  The cost of these nanosatellites is small enough to fit into many school budgets. CubeSats are built to investigate areas of scientific interest such as the earth’s atmosphere, space weather, in-space propulsion, radiation testing, and communication, to name a few. Satellites are selected based on their investigations and how they align with NASA’s strategic plan.

One area of CubeSat research at the South Dakota School of Mines & Technology is to expand from one small satellite to a swarm of small satellites working together. This has the potential to multiply the impact and effectiveness of a single CubeSat.

“Sometimes you want to have a larger project that still takes advantage of the affordability of the CubeSat, and we can do this with a swarm of these small satellites working together,” says Skye Rutan-Bedard, an undergraduate student at SD Mines who is part of a CubeSat research team.

This summer Rutan-Bedard is working on developing small cameras that can detect tags, similar to QR codes, on nearby CubeSats. “The idea is that the code can be used to identify a satellite and locate in 3D space.” This allows densely packed configurations of CubeSats and even docking of individual CubeSats in space.

“If we want to do big things with these small satellites we need to focus on collaboration,” adds Hadi Fekrmandi, Ph.D., an assistant professor of mechanical engineering at SD Mines who is one of the faculty leading on the CubeSat project. “It’s a very competitive program and only the schools that put forward a new idea will succeed,” he says.

The collaboration Fekrmandi is building includes NASA centers, South Dakota State University and private industry. NASA Marshall Space Flight Center is interested in developing multi-CubeSat using video camera guidance. L3Harris Technologies is an agile global aerospace and defense technology innovator, delivering end-to-end solutions that meet customers’ mission-critical needs. The company has funded previous senior design projects at SD Mines. “L3Harris is very active on the communication aspect of these CubeSats, and we are working on the navigation guidance and control,” he says. The work to create a CubeSat swarm is parallel to other research at the university on the potential for swarms of autonomous flying drones.

Mines researches plan to test the swarm algorithms developed by the CubeSat team on NASA’s own small satellite flight software. “This way we will make sure they work in simulated orbital dynamics before we test them in space,” says Fekrmandi.

NASA selects satellites and helps launch them through their CubeSat Launch Initiative (CSLI). Most of the missions are deployed through the Educational Launch of Nanosatellites (ELaNa). Since the program’s inception eight years ago, NASA has selected 162 CubeSat missions from 93 unique organizations in 39 different states. No satellite from South Dakota has yet to be chosen, and researchers and students at SD Mines are working to change that. The university hopes to have its first satellites chosen for launch in the coming years.