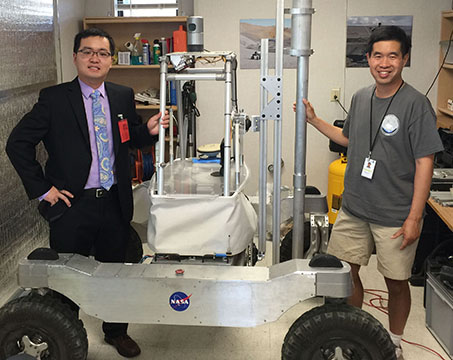 Printed in The Brookings Register

October 25, 2016 – Designing a robot that can learn from its environment and thereby explore a new planet – that’s what a South Dakota State University assistant professor wants to do. Zhen Ni of the electrical engineering and computer science department is working with colleagues at the South Dakota School of Mines and Technology on a grant titled ”Development of Intelligent Control System for Autonomous Robot Navigation for NASA Space Applications.”

Through a Research Initialization Grant from the NASA Experimental Program to Stimulate Competitive Research program, Ni presented a design concept to scientists and engineers at the NASA Ames Research Center in Silicon Valley, Calif., in August. The Ames center is home to the Rover Test Facility.

“We are proposing a new computational intelligence algorithm to enable the robot to learn as it explores and gathers data from the planetary environment,” Ni explained. “The robot can gather information before human astronauts arrive or can do tedious repetitive work in the harsh environment, saving astronauts’ time.”

Using learning-based techniques, the robot will learn from its environment and then pass that information in nearly real time to a site or station where human beings are, Ni explained. Such autonomous capabilities, which would be useful for Mars or moon exploration, have been a longstanding challenge for NASA.