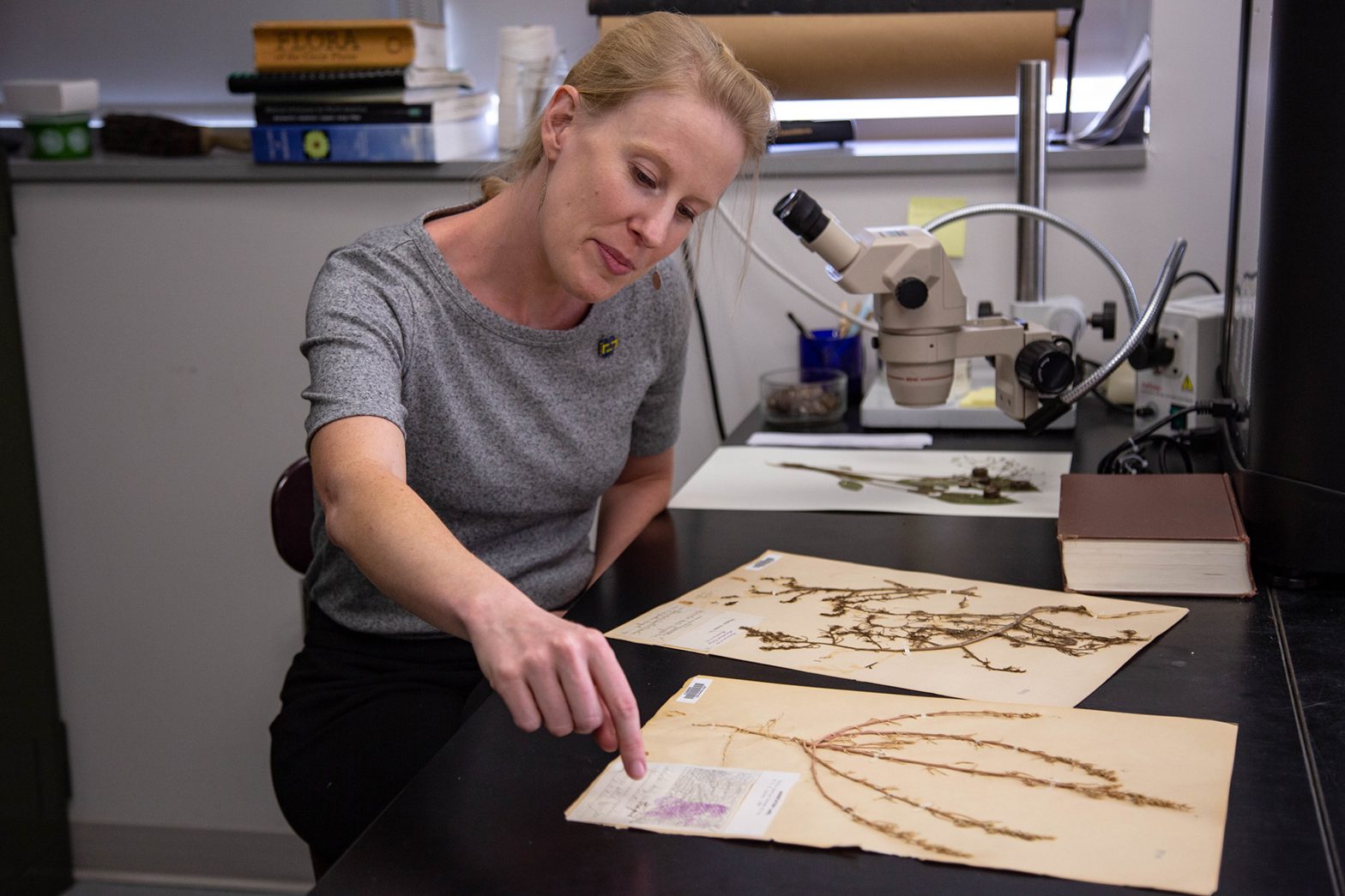 Thistles tumbling across the plains have become an iconic symbol of the American West. However, scientists know very little about how this Eurasian weed adapted genetically to thrive in the United States, according to botanist Maribeth Latvis, an assistant professor in South Dakota State University’s Department of Natural Resource Management.

Latvis is part of a five-university team of scientists who will use
historical plant collections to study the evolution of invasive species. The research is being done through the newly established Consortium of Plant Invasion Genomics, known as CPING. Knowing what makes these species so successful at adapting to a new environment may help scientists figure out how to control them.

The consortium, led by University of Louisiana at Lafayette, is made possible through a four-year, multimillion-dollar National Science Foundation grant from the Established Program to Stimulate Competitive Research Infrastructure Program. Other institutions working on the project are the University of Alabama-Tuscaloosa, West Virginia University and Wichita State University.

“Each of the five research hubs focuses on a different invasive species,” said Latvis. The hub centered at South Dakota State University will analyze the Russian thistle, which started its North American invasion in Bon Homme County, South Dakota, in the 1870s.

“The seed likely entered the country through contaminated flax from western Russia or Ukraine,” she pointed out. Within 20 years, it was already widespread in California. “It’s one of the fastest plant invasions on record.”

Through the SDSU herbarium collection, Latvis can analyze thistle specimens from the 1880s and the 1890s. “It’s like Jurassic Park, in a way. You get this old DNA and do research with it,” she said. “However, working with old DNA is tricky—the older the DNA is, the more degraded it can get.”

The researchers had to establish that they could successfully extract high quality DNA from specimens more than 100 years old. Latvis did so with the help of professor Jose Gonzalez, who will be assisting with the project through SDSU’s genome sequencing facility.

“Using DNA extracted from these historic specimens, we can capture genetic information at the start of an invasion and then look at changes that might be happening through time with these populations,” Latvis explained.

In addition, Latvis also gather information from plant collections in other states, including California and Idaho, as well as in Russia and Ukraine, where this species of tumbleweed likely originated.

The CPING researchers will also be training undergraduates and faculty from 60 institutions in 18 EPSCoR states.

“We sent questionnaires to other educational institutions within the EPSCoR states to identify researchers who are interested in learning about genomic and bioinformatics,” said Latvis. The responses will help identify faculty scientists to participate in a five-day boot camp in year two of the grant. Training materials, tutorials and laboratory protocols will also be available.

“The emphasis is on training future trainers,” she added. The consortium seeks to train 36 faculty members from regional colleges and universities, including tribal colleges.

In addition, scientists worldwide will have access to the information the researchers gather through GenBank®, an open-access, federal database for genetic data. As a result, Latvis said, “the impact of this research will be much larger than the project itself.”