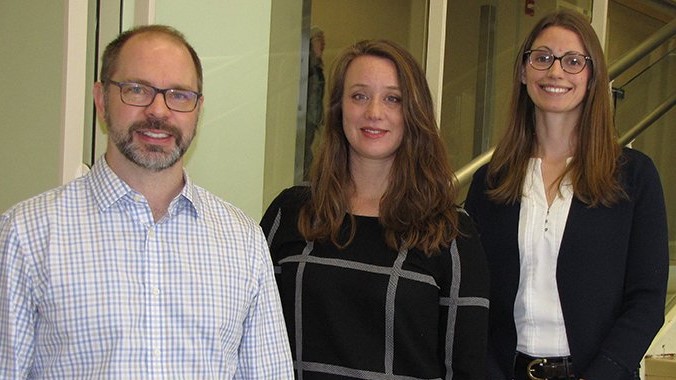 This piece by South Dakota State University was published April 6.

Biomedical research being done at South Dakota State University, specifically in the area of inflammation, will be advanced through a $10.8 million, five-year federal grant.

The award from the National Institutes of Health will fund work in the newly created Center of Biomedical Research Excellence (COBRE) and is potentially renewable for a second and third five-year period. “What the center aims to do is really build strong biomedical research at SDSU,” said Adam Hoppe, the primary investigator and center director.

It will fund the research of current faculty members, bring on new researchers and staff, and add equipment to allow for more sophisticated research.

Daniel Scholl, vice president for research and economic development at SDSU, said, “This is an exciting development for the university and recognizes the great work already taken place to put SDSU in a position to receive this prestigious award from the National Institutes of Health. It also is a tribute to Hoppe and collaborators’ leadership, vision, and persistent hard work.”

Hoppe particularly cited Radhey Kaushik, head of biology and microbiology department, for “playing an integral role in developing the proposal and contributing to the project by providing his immunology expertise and administrative support.”

Hoppe added that the new center is a progression of the South Dakota BioSystems Networks and Translational Research (BioSNTR) center that was created in 2013.

Then the state awarded the center $12 million over six years when it was selected as the South Dakota Established Program to Stimulate Competitive Research (SD EPSCoR) submission to the National Science Foundation Research Infrastructure Improvement Track-1 program. That funding ended in 2018, but smaller grants and university investment have kept the work active.

The new award will serve as an “accelerator” to advance the work of junior researchers to the level that they can received sustained funding from the National Institutes of Health and the National Science Foundation, Hoppe said.

The work of two research leaders was identified in the proposal and a third one is to be solicited. Hoppe noted that Jaime Lopez, an assistant professor in biology and microbiology, was part of the team that developed the proposal, however, he successfully secured sufficient independent funding through the National Institutes of Health and the National Science Foundation to graduate from the Center of Biomedical Research Excellence program before it began. The two current researchers whose work will be funded are Natalie Thiex and Darci Fink, associate professors in biology and microbiology and chemistry and biochemistry, respectively.

Hoppe, a chemistry and biochemistry professor, said, “Macrophages are consistently cleaning debris out of the tissue. They are the most important cell in regulating inflammatory response. There is a balance between activating inflammation (to begin the healing process) and resolving inflammation,” which, when unchecked, increases the risk for various diseases.

“One of the gaps in knowledge is exactly how do cells at the wound site communicate with each other to begin response,” Hoppe said.

Thiex, who has already done work in this area through smaller National Institutes of Health grants, will attempt to fill that knowledge gap through expanded research made possible by the $10.8 million award.

Fink, who also has received smaller National Institutes of Health awards, studies lymphatics and the formation of lymphatic vessels. The lymphatic system is a network of vessels and organs that regulates the amount of fluid in the human body and defends it against infections.

Hoppe said, “At the site of inflammation, you can grow new lymphatic vessels, which drain fluid and regulate swelling and the inflamed tissue site. What remains a mystery is how these cells grow and organize themselves into functional structures and how they communicate with each other and the tissue they are growing into.

“When these vessels do not grow or do not grow properly, you can have chronic inflammation or chronic swelling.”

Finding a third project leader will be a lengthy process involving advisory committee recommendations and National Institutes of Health approval. However, Hoppe said any junior faculty member at SDSU who has research relating to inflammation at the cellular or molecular level would be eligible to apply.

It is expected two additional researchers would be hired through external searches during the five-year grant period. The budget also calls for hiring technicians and graduate research assistants.

Equipment and facility upgrades also are planned. The jewel is a $300,000 confocal microscope that will be housed in the Functional Genomics Core Facility in the McFadden Biostress Laboratory and will help with the imaging of cellular and molecular organisms during inflammation, Hoppe said.

Another purchase will be an addition to existing equipment. That $100,000 item will permit single-cell sequencing technology so researchers can determine gene expression within individual cells, informing understanding about how they communicate during inflammation.

Both purchases should take place during the course of the year. There also will be an immediate $300,000 update to the small animal (mice) research facility within the university’s animal resource wing headed by university veterinarian Michele Mucciante.

Hoppe notes the development of genomic sequencing has created tremendous amounts of information and the need for experts in these areas to assist in the work of researchers like Thiex and Fink. Hence, the center includes experts like Jose Gonzalez, who runs the gene sequencing lab on campus, and Xijin Ge, a bioinformatician in the mathematics and statistics department.

Also part of the new award are formal arrangements with mentors at other universities to provide mentoring to researchers and an advisory committee of experts from across the country. There also is a speaker exchange with the Mayo Clinic in which faculty members exchange findings, Hoppe said.

“Basic biomedical research has always been a part of what we have been doing at SDSU. This is taking it to the next level,” the professor shared.