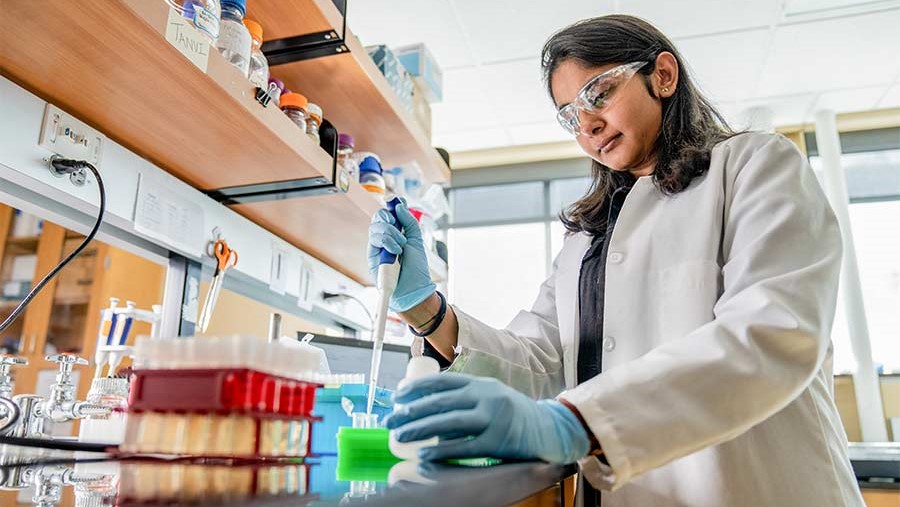 This piece by South Dakota Mines was published March 3, 2022.

South Dakota Mines researchers are part of a new $6 million Track-2 grant from the National Science Foundation (NSF) to develop bioplastics for use in agriculture over the next four years.

The project, called Bioplastics with Regenerative Agricultural Properties, or BioWRAP, includes a research team at Mines working alongside a principal investigator at Kansas State University and researchers at the University of Nebraska-Lincoln.

Traditional specialty crop production, like organic agriculture, often use petroleum-based plastic sheets to cover the ground. Conventional plastics leave microplastic residues that contaminate the environment and increase stormwater runoff. This project aims to reduce the use of plastics, herbicides, fertilizers and associated environmental impacts in agricultural production by creating an all-in-one bioplastic system that can better manage weeds, add nutrients to soils, improve soil and plant health, and save water.

“This is exciting research to see unfold on campus as it can have a major benefit for farmers in South Dakota and across the nation. Kudos to Mines researchers for seeking solutions that are both cost saving for our ag producers and healthy for the environment,” says Mines President Jim Rankin.

BioWRAP researchers aim to create spray-on biodegradable plastic that can be administered to croplands. The product would be locally produced from natural materials like corn stalks, hay, or chicken feathers and infused with nutrients and microbes that will add to soil health as the covering degrades. The goal is to create a material with a smaller carbon footprint than the traditional plastics used commonly in organic agriculture.

“This project uses the natural resources we have right here in South Dakota to launch a new era of biodegradable and sustainable materials that help the agricultural economy by adding value to local crops while increasing soil health and crop yield,” says David Salem, Ph.D., who leads the Composite and Nanocomposite Advanced Manufacturing — Biomaterials (CNAM Bio) Center at South Dakota Mines and a co-principal investigator with BioWRAP. Salem also plays a leading role at Mines in collaborative research with the new POET Bioproducts Institute.

Mines is contributing to the project in four main areas:

Water Seeps In; Weeds Stay Out

Researchers are working to create a slurry mixture of starch-based biopolymer and degradable bioplastic pebbles. Once sprayed onto the ground, the covering would let water in but keep weeds from growing. Chris Shearer, Ph.D., is an associate professor of civil and environmental engineering at Mines who brings an expertise in concrete as a co-principal investigator on the project. “This product is made of biodegradable pellets and a binder that will behave like pervious concrete,” says Shearer. “There is a lot of crossover between the two materials.” Shearer will work to measure the properties of various BioWRAP mixtures to maximize the benefits of the final product.

Keep it Local: Help the Environment and Boost the Ag Economy

Heidi Sieverding, a research scientist in the Department of Civil and Environmental Engineering at Mines, is one of the co-principal investigators on BioWRAP focusing on understanding the environmental impact of the new product. “To make it sustainable, we can’t be buying a bioplastic from a factory overseas; we have to make it right here,” says Sieverding. “We want to find a way to sustainably make bioplastics in small towns and communities and use them to boost rural economies.” Sieverding notes that a product like concrete is always made from local materials — close to where it’s needed. “We can manufacture biodegradable plastic locally in the same way we make concrete,” she says. Farmers could bring crop residues to local biorefineries for processing and bring bioplastics back to the fields to use. Sieverding says this sort of change would need to be done in conjunction with local farmers in a grassroots effort to make sure it benefits producers. She notes the creation of the ethanol industry, which has helped farmers find new value for their crops, is one example of a way this product could move forward.

Making a Home for Good Bacteria: Imbedding Nutrients in the Soil Cover

“We are working to create a tunable bioplastic,” says Rajesh Sani, Ph.D., professor of chemical and biological engineering and chemistry, biology, and health Sciences at Mines and a co-principal investigator with BioWRAP. Sani also leads an NSF-funded project called BuG ReMeDEE, which is producing bioplastics from the greenhouse gas, methane, in collaboration with CNAM-Bio. Sani and the researchers on his team aim to create and functionalize bioplastics that are the perfect home for nitrogen fixing bacteria. These indigenous bacteria will live on the biodegradable plastic compound and give carbon and nitrogen nutrients to the soil throughout the crop cycle as the bioplastic degrades. If widely implemented, this has potential to save billions of dollars in fertilizer costs every year. “This is a very ambitious goal and if we make this happen, it will revolutionize the agriculture industry,” says Sani. “We are trying to target several things: control the weeds, control the soil temperature and humidity and increase soil health over time as these bioplastics will be nutrient for the soil and plants.”

One of the key ingrediencies of BioWRAP is a revolutionary way to efficiently convert ag byproducts, like corn stalks, into an environmentally-friendly biodegradable plastic. During her doctoral research at Mines, Tanvi Govil discovered a microbe that eats corn stalks and produces bioplastic without costly pre-treatments previously required to create this material. This patent-pending breakthrough technology is thanks to research funding from the CNAM-Bio Center, supported through the South Dakota Governor’s Office of Economic Development. “This BioWRAP project gives us a chance to apply this new degradable bioplastic we developed at Mines as environmentally friendly mulch films,” says Govil, who will complete her Ph.D. this spring and continue her post-doctoral research at Mines through support from the BioWRAP project, while continuing to contribute to the core goals of the CNAM-Bio Center.