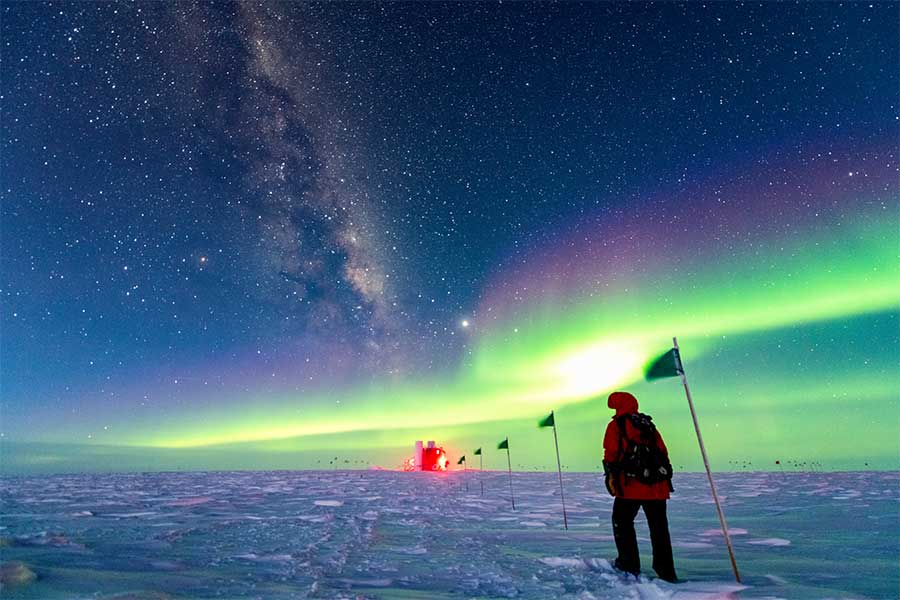 This piece by South Dakota Mines was published September 15, 2020.

South Dakota Mines received a $6 million National Science Foundation (NSF) grant to enhance big data processing and astronomical capabilities of the world’s largest neutrino observatory, IceCube, located at the geographic South Pole. The research will attempt to answer a fundamental question that has puzzled scientists for more than a century regarding the origin of subatomic cosmic particles that carry visible energy.

The four-year project titled “RII Track-2 FEC: The IceCube EPSCoR Initiative (IEI) – IceCube and the Data Revolution” brings together scientists from South Dakota Mines, University of Alabama, University of Alaska Anchorage, University of Delaware, University of Kansas and University of Nebraska-Lincoln. The team of researchers will work to solve challenges facing Multi-Messenger Astronomy (MMA) – this new form of astronomy integrates the various types of signals coming in from outer-space to paint the most-clear picture possible of our universe. The project is funded through NSF EPSCoR (Established Program to Stimulate Competitive Research). EPSCoR’s mission is to advance excellence in science and engineering research and education in its jurisdictions.

“Astronomy has enormous influence on human life and thoughts throughout history: from navigating early explorers across vast oceans to arousing our deep curiosity about what the universe is made of,” says Dr. Xinhua Bai, associate professor of physics at South Dakota Mines and the IEI’s principal investigator.

This project will grow significant big data processing capability across the six participating institutions. It provides opportunities for scientists with complementary expertise to collaborate on research and development that could not be done within a single jurisdiction. It develops high-skill workforce by providing systematic training in big data for students and early-career scientists. It also supports exposing secondary school students and the public to IceCube and its big data challenges, which will help recruit young people into STEM fields and promote diversity and inclusion.

Traditional astronomy has progressed from early telescopes using visible light to include the full electromagnetic spectrum from radio waves to gamma rays. Cosmic rays were discovered over a century ago, but how the most energetic subatomic particles are produced remains a mystery. Recent discoveries by the international scientific community have opened new windows on the universe utilizing gravitational waves and high energy neutrinos from deep space. Observations of these cosmic messengers have brought us into the era of MMA. IceCube has a unique capability as a neutrino detector because neutrinos are electrically neutral and rarely interact with anything. They allow astronomers to “see” much deeper into the universe at higher energies than previously possible. The IEI team will pair information gathered by IceCube and other detectors with cutting-edge big data techniques to push the very frontiers of astronomy.

“Multi-messenger observations of astrophysical neutrinos, gravitational waves, cosmic rays and electromagnetic signals allow us to study matter, energy and the cosmos in fundamentally new ways.” Bai explains. “Multi-messenger observations also produce huge amounts of data with enormous complexity. The success of MMA requires creative methods to obtain accurate physics insight from the vast amounts of data, and that’s the focus of this project.”

IceCube’s cubic kilometer array of over 5,000 optical sensors run two kilometers deep into the glacial ice at the South Pole, turning a gigaton of high-purity ice into a particle detector. This in-ice array, combined with the Cherenkov detector array, called “IceTop”, on the surface of the ice, produces about one terabyte of data per day. This is equivalent to about 500 hours’ worth of video each day. The most interesting astrophysical neutrino events scientists are studying resemble a handful of insects randomly fluttering for a few microseconds in these movies. “To identify these tiny flutters in the sea of data is already a huge challenge,” Bai says. “This is not just a needle in a haystack, this is a microscopic shred of a needle in a haystack.”

The IceCube collaboration includes scientists from 53 institutions in 12 countries who seek to answer a variety of questions from cosmic rays to dark matter. Each of these myriad studies requires various data techniques to explore different aspects of information embedded in the huge amount of data generated each day. Past breakthroughs by IceCube (including the high-energy astrophysical neutrino flux and the first high-energy astrophysical neutrino source blazar TXS 0506+056) have prompted work and funding toward IceCube-Gen2, the next generation of neutrino observatory that will increase the data volume by 10 times and operate through 2050.

“EPSCoR states have played a pioneering role in the IceCube project that has opened a new window on the universe. The funding of the IEI will create opportunities for enhancing the science with its inspirational research program,” says Francis Halzen, Ph.D., Hilldale and Gregory Breit Professor in the University of Wisconsin-Madison, the founder and principal investigator of IceCube. “By supporting a more inclusive and diverse group of students and scientists, this project will greatly enhance the contribution of EPSCoR universities to the future of multi-messenger astronomy with the design and construction of the next-generation neutrino detector.”

Moreover, the project supports five early career faculty at four of the IEI institutions, preparing them for a leadership role in future MMA projects. While the big data economy is ascendant around the globe, preparing the workforce with skills in advanced data science adds additional long-term benefit to all six participating EPSCoR states.

The project will establish a diverse, competitive, and sustainable EPSCoR team with increased research capacity to ensure that EPSCoR leverages a prominent role in IceCube’s future program and NSF’s Windows on the Universe theme.