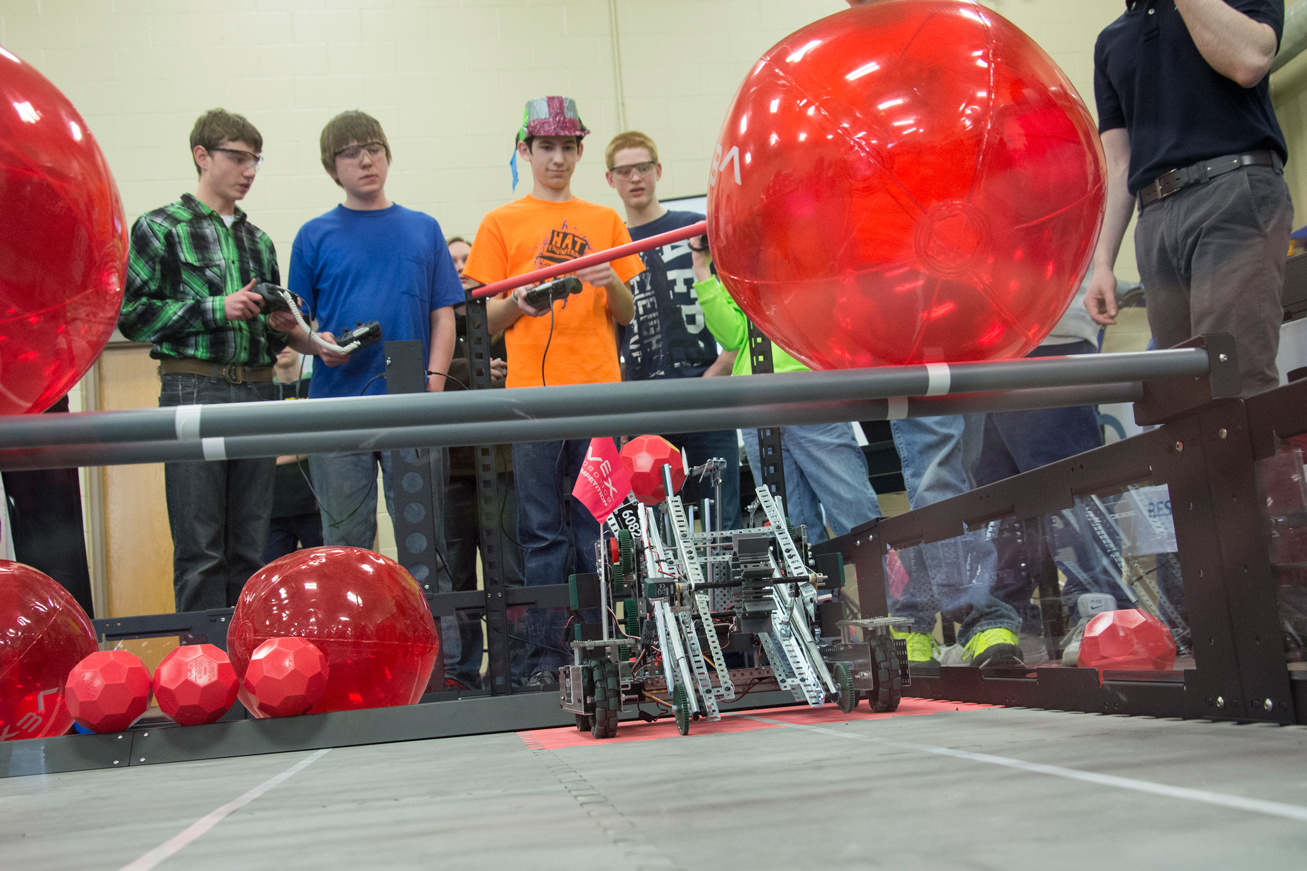 Teams from Harrisburg High School and the Sioux Falls Career and Technical Education (CTE) Academy qualified to compete in the world championship after winning awards at the South Dakota State VEX Robotics Competition.

This year’s game was called “Toss Up.” The game consisted of 28 large and small balls on a 12-foot by 12-foot field. The teams developed two-team alliances and worked together to push the balls into the scoring area while attempting to prevent the opposing alliance from scoring.

VEX Robotics gives students an opportunity to take part in an engineering based project to learn basic engineering skills.

“It was much harder than I expected. There are many parts of the robot able to go wrong during a tournament and many obstacles to overcome when designing and building a complex robot,” said Rilyn Fox, an 8th grader from Harrisburg High School.

The robots couldn’t exceed 18 cubic inches. They also needed to be programmed to score the most points possible, first without the use of controls for 15 seconds. Then the students were allowed to control the robots for one minute and 45 seconds. Fox said it was challenging to program the robot to complete the autonomous part.

Students also learned how to solve problems and to form alliances with teams from other schools to achieve their goals.

“The students were driven but still willing to help each other. They had ‘never quit’ attitudes,” said Ray Tracy, the South Dakota VEX Robotics co-coordinator.

When they created alliances, students from other teams worked together for the first time to develop the best strategy for the competition.

The students got the base kits for their robots in the fall, Tracy said. He traveled to the schools to deliver the kits and showed the students how to use them. VEX also provided instructions for a claw bot, which can be used for every challenge.

“Our team did not use this design, but in the end the robot looked similar to it,” Fox said.

The students were free to design their own robots with assistance from their coaches and teachers. Students recorded their designs in an engineering notebook to keep track of the changes they made.

Students first competed in preliminary scrimmages held at their schools in November. Scrimmages were held in Harrisburg, Mitchell, and Groton, Tracy said.

“Our team did very well in all the tournaments. The further we got into the season the more my confidence grew because we made many adjustments and improvements to our robot making it a worthy opponent by the end of the year,” Fox said.

After competing, the students recorded what went well and what needed to be done for redesign before the state tournament.

“I felt proud of my team. It was a great feeling to be the best in the state and compete at the international competition,” Fox said.

The two teams won the opportunity to represent South Dakota and were two of 700 teams from 400 VEX Robotics Tournaments who participated at the VEX Robotics World Championship.

“We didn’t do so well during the matches, but it was a cool thought to play against and learn from the best in the world,” Fox said.

The students met people from other schools and were able to see what others did to achieve the goals of the game.

“It was a fantastic opportunity to do this, and I am extremely grateful I can compete next year,” Fox said.

Students like Fox are able to continue to compete in VEX Robotics Tournaments through the support of SD EPSCoR. SD EPSCoR is funded by the National Science Foundation EPSCoR grant No. 0903804.