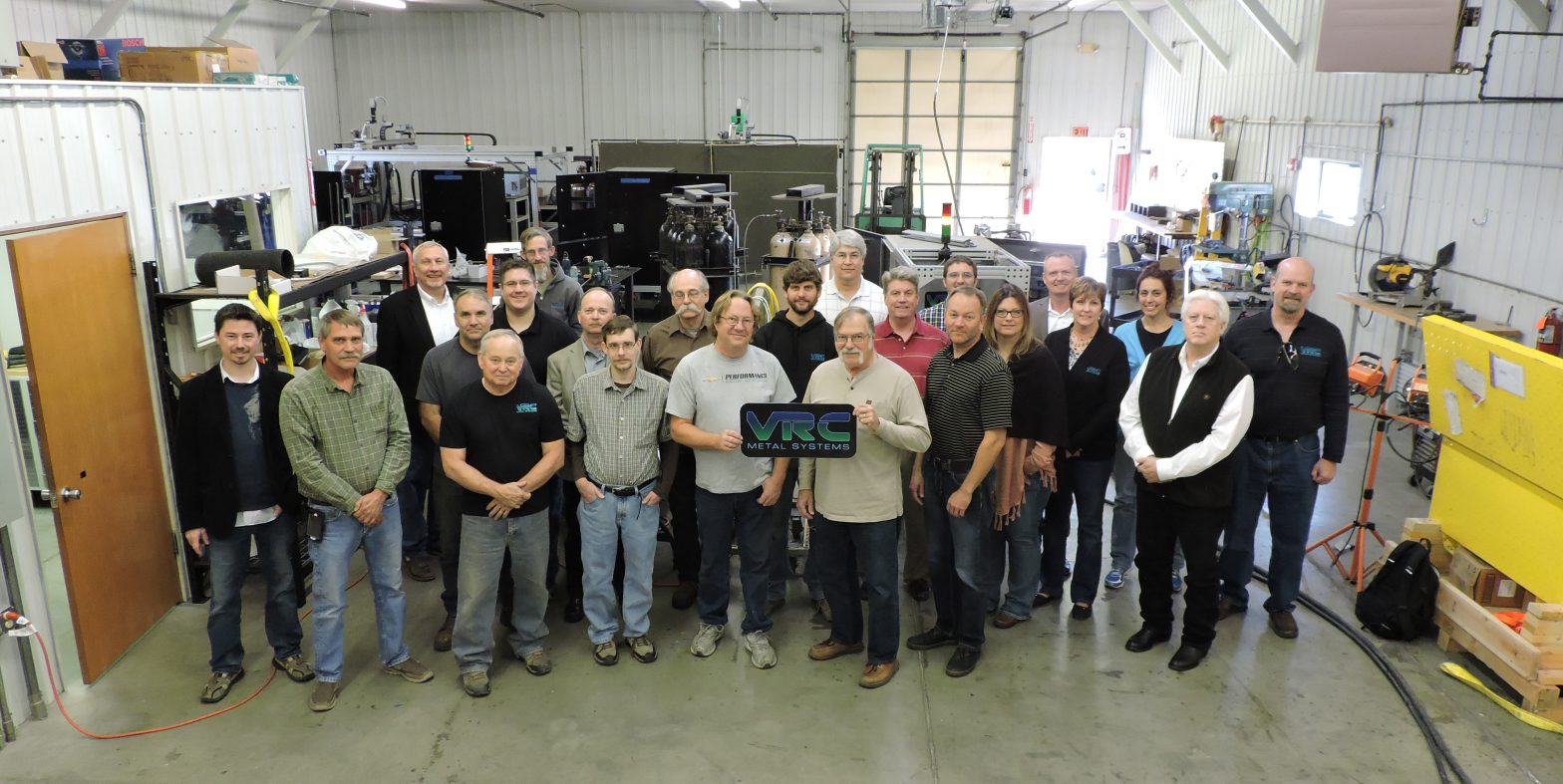 Rapid City, SD – A unique collaboration between South Dakota School of Mines and Technology (SDSMT) researchers, the South Dakota Governor’s Office of Economic Development and the Army Research Lab has resulted in a technology-driven manufacturing process that is changing the way metals are repaired and maintained.

VRC Metal Systems was founded in 2013 by Rob Hrabe and Christian Widener after obtaining an exclusive license for the commercialization of a patent-pending innovation for a hand-held, high-pressure cold spray system. Located in Rapid City, VRC currently has 36 employees and is actively hiring additional staff with the goal of reaching 50 employees by the end of 2017.

The cold spray technology is a process for creating solid coatings that is similar to spray painting that “paints” metal to surfaces. The process uses a very hot, high-pressure gas, to spray metal powders at such a high speed, that it permanently sticks to a surface.

The system was developed at AMPTECH, a South Dakota Governor’s Research Center, specifically to provide rapid, high-quality repairs to Department of Defense (DoD) weapon systems at Air Force bases and forward operating locations. The hand-held capability and mobility of the system are important design features of the cold spray product. VRC has continued to expand its offerings to include other advanced manufacturing solutions for the DoD as well as commercial clients addressing wear or corrosion issues such as aircraft repair and bridge maintenance.

According to Co-Founder and Chief Technology Officer Christian Widener, VRC was specifically located in Rapid City because of its close ties to the SDSMT Governor’s Research Center and Widener’s continued appointment as the director of the Arbegast Materials Processing and Joining Laboratory at SDSMT. “This is where we built the technology,” said Widener. “It is becoming the hotbed for advanced manufacturing technology in the nation.”

While working on research at SDSMT, Widener and Hrabe created a prototype system, which resulted in a patentable innovation. “We realized we were developing these repair solutions but no one was going to be able to do those repairs if these systems aren’t available. VRC Metal Systems was born through finding a problem that needed to be solved in an industry and then realizing that if we didn’t also simultaneously make that product available, it was going to be a solution with no way to implement it,” said Widener.

Widener noted that South Dakota’s technology-friendly programs were instrumental in allowing their start-up business to grow and flourish. These programs included Dakota Seeds, Small Business Innovation Research (SBIR) Awards, the Governor’s Research Center and the Governor’s Giant Vision program, all part of the South Dakota Science and Technology (S&T) plan that contributed to the success of VRC Metal Systems.

The SDSMT AMPTECH Governor’s Research Center funding provided the research infrastructure needed to develop the innovations. VRC licensed the technology and has received SBIR awards to develop and test specific applications for the product. According to Widener, SDSMT and VRC have partnered on multiple research grants. “Over three quarters of a million dollars has come into the research labs as a direct result of partnerships on VRC research awards,” said Widener.

“I think the Governor’s Research Center has, by far, been the single largest contributing factor to the success of VRC for two reasons,” Widener said. “First, we had funding to go after the things that might be able to be something, but weren’t yet. Second, the metrics for the Governor’s Research Center were economic development-related and not academic. So, it created a great scorecard for me as a faculty member to do things that were going to create jobs, and not just a research paper.” He also said the size of the grants over a longer period of time were instrumental in conducting the research, because it takes time for ideas to develop.

Widener’s advice to entrepreneurs considering launching a STEM-based business in South Dakota: “There are some tremendous opportunities here related to advanced materials and manufacturing and other high-tech areas. Look for opportunities to network with other companies, hire interns and take the initiative to get involved at universities in research and development grants. We are a smaller state that generates a lot of opportunities because it’s easier to obtain access for the support functions and opportunities that are here.”

VRC offers internships through the Dakota Seeds program, which is funded by SD EPSCoR and recruits heavily from SDSMT. Its recruitment efforts also target former students who’ve moved away, bringing them back to join the state’s high-tech workforce.

About South Dakota Science and Technology: The South Dakota Science and Technology (S&T) plan was first created in 2010 at the request of Governor Mike Rounds. In 2013 Governor Dennis Daugaard tasked the SD EPSCoR Advisory Committee to update the plan to help guide and focus infrastructure development investments as well as workforce development. The S&T plan proposes a set of South Dakota-specific strategies for strengthening basic and applied STEM research, aligning workforce development activities with these research strengths and continuing to grow the entrepreneurial culture that is the hallmark of a knowledge-based 21st century economy. To learn more, please visit sdepscor.org/vision.